You are here: Home / Feature / Freed: How I Lost God and Gained the World

It all began after a bully bashed my head into the side of the school, and I had a near death experience. I found myself hovering near the light, ready to pass over to the other side, and although there were beings there to greet me, none of them even approximated anything I expected from my religion.

There was no God nor Jesus nor Holy Spirit. It was a wild experience, but there was no sense of holy or religious awe. I thought some element of my faith would have been there, but it wasn’t. 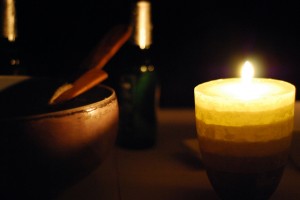 From that day forward, I would lie on my bed on Sundays after church and turn the ideas of God and Christianity over in my heart and mind. I could not bring myself to wholly accept either one of these concepts individually — and the two married together made no sense to me at all. The one place that all of it would have been laid plain was in death, and neither God nor Christianity were there.

I was certain that my inability to accept either, combined with my non-experience of the holy when I died, meant that I had some kind of inbred spiritual deficit. I was sure that I could not be destined for good things.

I filled my childhood journals with ruminations on the nature of God and my place in the universe. I prayed with as much purposefulness as I could muster, waiting for the time when I would feel anything at all beyond the thoughts I was trying to project into the mind of God. I stared into the fire at summer camp, looking for signs in the flames while we sang religious rounds.

Slowly, though, I started to circle the lynch pin. My assumption was that I simply needed some as-yet-missing piece of understanding to fall into place and my faith would follow. But my assumption that faith in the one true God should be as natural as taking a first breath blinkered me from seeing what was truly underlying my struggle: the presumption that there was an all-knowing being who had created and now oversaw the human race.

It struck me hard and loud at the age of 17 when I finally understood that I did not really believe in the capital-G God that had been taught to me since someone could press my palms together in nightly prayer. I had no faith, because I had no belief. After seven or eight years of serious thought, I could come to no other conclusion. Try as I might, I simply did not believe in the underlying premise of a unified deity. I felt as though the entire universe, as I had understood it, had had its legs knocked out from under it.

With no idea how to go on without the concept of God, I attempted to keep the world together as I understood it and decided that it must not be that God did not exist; it had to be what I had always suspected: I had some kind of spiritual malformation, a metaphysical birth defect. Sure only of my soul-sickness, I contemplated suicide.

Suicide sounds like an extreme reaction, but the idea that the Christian God that had been a constant in my upbringing might not even be there for me to find was terrifying. I could not fully admit to my lack of belief when all of my ideas about leading a meaningful and good life were guided by the concept of an omnipotent being. How could I abandon my search for Him? Who was I without God? Who were all the believers who had raised and loved me? What did the last 17 years of my life mean without Him? All my thinking and writing and praying appeared to mean nothing.

In an effort to preserve my very life, I persevered for several more years with thought, prayer, church-going, meditation, and the sampling of other faiths. I was a desperate dog looking for a bone. I looked to Catholicism and found that I liked the use of ritual but little else. Judaism made for interesting reading, but again, there was no spark. The Bahá’i faith seemed to hold out the most promise, being that it embraced its religious predecessors and pointed to a potentially positive future for humanity, but the night I signed up to be a card-carrying member, I was sure that everyone in the room saw my ears burn with a deep red shame. I felt like a liar. 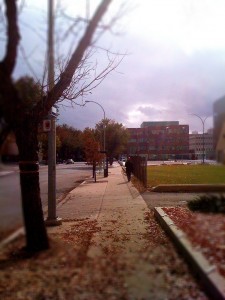 No matter how many meetings I went to or how many entreaties I made or how many ritualistic practices I memorized, I could not be a theist. When I left that last religious meeting, I waited for the hollow feeling in my chest to return, that feeling of deep grief I had felt at 17 over a path lost. I believed then that I might have finally arrived at the end of meaning, and I braced myself for more of the pain I had felt all those years before.

Strangely, though, the pain did not come. In fact, I felt lighter. The tension in my shoulders loosened. I could feel the night air enter my lungs for the first time in years. When I looked within and found myself without God, I felt blasphemously joyful and freed.

There was no God, and yet all the horror and wonder on earth remained. Nothing was changed. I was dumbfounded.

This realization that had been so earth-shattering as a teenager was suddenly relieving. It had taken me years after my brush with death, but I finally understood that my lack of religious belief in a unified deity did not mean that I lacked belief altogether. My near death experience as a child had already shown me that there was more with or without God. I had simply lacked the scope of vision to see it. There was no need for that “more” to be tied to a deity for it to exist, and there was no need for religion to make any of it possible.

I suppose that the closest term I have right now for my state of belief is agnostic atheism. There is something more than this earth for us, and we are not only these bodies and minds, but what that is is unknowable. I would prefer to have the metaphysical workings of the universe codified, to have a book of instructions — but as my desire and reality rarely coincide, I have had to become accustomed to living in this middle place of not knowing while being quite certain. It is a place I have learned to embrace with a conviction that I could never dedicate to the religion of my childhood.

Letting go of God and my crisis of faith was simultaneously one of the most psychologically, emotionally, and spiritually difficult — and yet most liberating — experiences I have ever had the good fortune to undertake. I find myself no longer spiritually bereft, but powerfully driven by the truth that is the universe and all that it holds for every thing in it.