You are here: Home / Feature / You Aren’t Always What You Eat, Right? 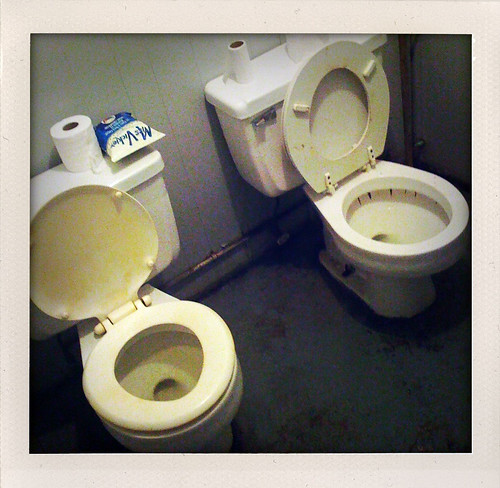 I was taking the bus back to Regina from Saskatoon, and this guy sitting behind me was singing Journey songs out loud. At first, he was doing it really quietly under his breath, so I didn’t mind that much, but he slowly raised his voice every time he hit the chorus, and eventually I couldn’t ignore him anymore.

He obviously found the sound of his own voice rather pleasing. I did not. While his phrasing was decent, he was pitchy and had a tendency toward hitting the sharp end of notes. Also, he stopped every few lines to loudly snork back excess snot out of his sinuses, which he would then loudly clear out of his throat.

The woman sitting next to me started shifting around and shooting looks back at him between the seats, but he was lost in his Journey euphoria. I chose the passive-aggressive route via Twitter:

It was a relief when the bus stopped in Chamberlain. I went into the gas station, bought a bag of chips, and waited in line for the bathroom. When I finally got in there, I found the set-up kind of confusing. Two stained toilets sat next to each other without a dividing wall. No matter which one I chose to use, I was stuck in a room with both of them. Ew. Still, it was either that or I would have to hover over the minuscule bus toilet while we pitched down the highway. I chose the toilets that sat still.

I hung on to the bag of chips with my teeth during the whole affair, because I didn’t want it to touch anything in there, but then I got the brilliant idea to take a picture of the double toilet situation and send it to Twitter. Isn’t that what people on Twitter like? Pictures of revolting bathrooms? Of course, they do.

It didn’t take long after I sent the tweet before @JenO_Eh replied with:

At first, I was confused by her tweet. What were “shitter chips”? When I double-checked the photo I had sent, I shuddered. 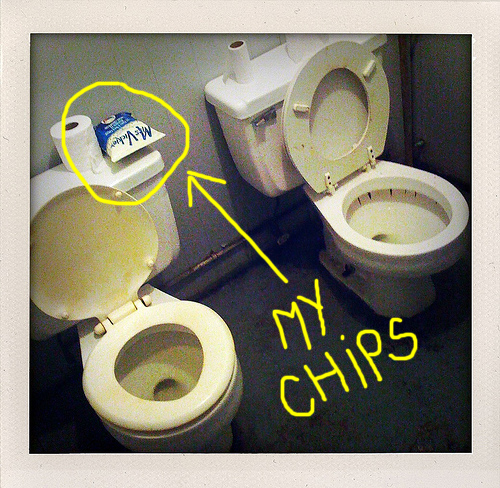 I must have momentarily lost my rational mind when I dug around in my purse for my iPhone, because I had unwittingly put the bag of chips down on the back of the toilet. I was eating those very chips the moment @JenO-Eh sent that tweet.

I WAS EATING SHITTER CHIPS.

Normally, I can handle all kinds of gross, because, as human beings, we’re already pretty gross to begin with, but that bag had been in direct contact with those toilets, and my hands had been all over that bag, and I had licked a lot of salt off my fingers. It made me feel like I might as well have just licked that toilet. Yes, that toilet.

Shitter chips: they could happen to YOU.