You are here: Home / Feature / Who Has the Perfect Job?

Writing employee profiles for our company newsletter provided a nice break from my normal routine of fixing forklifts and trying to boss people around. While interviewing my fellow workers I posed the question: If you could exchange jobs with anyone in the world, whom would you choose to be?

As I was seeking meaty stuff for my articles, the interviewees were told the person they selected did not have to be real. I am happy to report our mandatory drug testing policy must be working, as no one could provide an answer. Makes for a safer workplace, I guess, but my stories were no screaming hell to read. I gave the question some thought, and came up with an idea of my own.

You can forget Brad Pitt, the President of the United States, and Sidney Crosby…

Want to know who really has the best job on the planet?

Here’s a guy who only works one day a year, and the rest of the time all he does is supervise a bunch of short people. How hard can that be? Just being the tallest guy at work appeals to me; I’ve fantasized about that for most of my life. The closest I came was one day when, in grade 12, I had to pick up my little cousin from kindergarten. It felt so good; I hung around there for a while until they finally kicked me out. 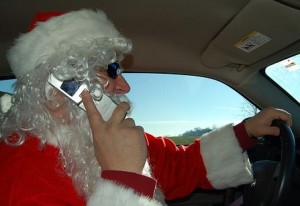 Like to travel? Who doesn’t! Would it surprise you to know that Santa’s been on more world tours than The Rolling Stones, and that one day a year when Santa actually “works”, all he really does is give away free stuff? And how about a job with free cookies at every stop?

So how much money would a guy make at a job like that? My guess is it’s got to be pretty good, as these celebrity endorsements can be quite lucrative, especially with the blue chip corporations — and who’s more successful than Coca-Cola? Besides, I figure with all that Ho -Ho -Ho- ing, Santa’s got to be on drugs, and you know how expensive they can be.

The only other person I ever knew that was in the same perpetual state of bliss was my neighbor, Ernie. And Ernie did a lot of drugs. Pot, mostly. Come to think of it, Ernie didn’t shave either, and with all the pizzas and beers he consumed, he resembled old St. Nick in the girth department as well. I thought about interviewing Ernie, but he works harder at avoiding jobs than actually ever getting one.

I figure Santa’s home life must be all right too — it’s obvious HIS wife doesn’t make HIM go to the gym. Nor does she make sure he’s decked out in the latest fashions. I’ll bet he’s never put a toilet seat down in his life, and probably has total control of the TV remote.

Unfortunately for us over-eight crowd, Santa is not real. So, for now anyway, it means I’ll have to continue with what I have been doing for the past 15 years. Someone has to fix those forklifts. And, who knows – if I lighten up on the guys, maybe they’ll start bringing me cookies.

“You’re never too old to chase your dreams”. That’s the mantra of writer Terry Hume.