You are here: Home / Feature / A Lesson Learned 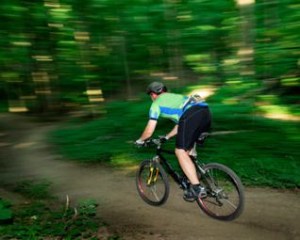 My wife is a finesses buff; going through a day without her exercising is as inconceivable as Don Cherry attending a Russian figure skating carnival.

Living in the Rocky Mountains provides Shelly with the opportunity to engage in the sports she loves, with snowshoeing, skiing, mountain biking and hiking being among her numerous outdoor interests. She also plays hockey and squash, and attends numerous yoga and pilates classes.

Like most fitness-minded people, she is careful with what she eats. Red meat has all but disappeared from her diet, and it amazes me how many ways she can dress up an avocado.

Having climbed her peaks, won her triathlons, and excelled in every sport that she has attempted, Shelly has now gone on to the ultimate challenge.

Getting me into shape.

Suddenly Lays Regular potato chips and mixed nuts no longer can be found in our house, and the fridge always has plenty of carrots. Do people really eat carrots? I thought they were just used as noses for snowmen. She even bought a membership for me at our local gym, to which I dutifully trot to on a consistent basis. Well, consistent enough for me anyway, I certainly don’t want to show up more than once a week and have people call me a fanatic.

It was in the midst of this latest attempt to coerce me into a make over that she decided one day it was time for us to go shopping. Like many small town residents, shopping to us means a lengthy drive to a city. So we hopped in the car for the two-hour trip to Lethbridge.

Marathon shopping sessions have always been a pet peeve of mine, and punctuality has never been one of Shelly’s strengths. However, I had a previously formulated escape plan all ready to go, and was itching to use it. I pulled my collar up against the winter chill as we strolled through the mall parking lot, grateful that the cold weather allowed me to wear my puffy coat without drawing attention to the bulk concealed in its pockets. As we passed through Sears to the mall entrance, Shelly said, ”How about we split up and meet in the food fair at noon for lunch? We can have a quick bite, then head to Costco and we should be on the road by 4.”

This was the moment I had been waiting for. The hours spent in front of the mirror, practicing that Clint Eastwood gaze, were about to pay off. The butterflies in my stomach were trying to convince me to back down, but I would not be denied.

It was my time.

Reaching into my pockets, I pulled out my ammunition.

I squinted my eyes, and leveled ‘the gaze’ on her.

“You said noon,” I remarked. “At 10 after, the first bad boy’s going down, then one every 10 minutes until you show up.”

“Are you serious? You’re not really going to eat those things, are you?”

“Suit yourself,” she said. “See you around noon.”

Then she walked away.

Suit yourself? Around noon? Whatever happened to, “Please don’t eat those things, I won’t be late. I promise,” or “Wow, I didn’t realize how much it bothered you when I’m late. I’ll be here at noon, you can count on me.”

I arrived at the rendezvous spot at 10 to 12, and paced like an expecting father until 10 past noon. I then set my watch back to 10 to 12 again, just to be fair. After all, she might be stuck in a line up somewhere. The second 10 past noon came and went, with still no sign of Shelly.

I learned long ago that bluffing undermines your credibility, and sets you up for failure the next time around. I had no choice.

The first Mars bar actually tasted pretty good; I hadn’t had one since I was a kid. Things went decidedly downhill from there, though, and when my wife showed up at 1:13 for our 12 noon lunch date I wasn’t the least bit hungry.

The lady at the Kernels outlet smiled in anticipation at my approach. Even though an out-of-towner, I was still a “regular”. I smiled back as I walked on by — the grab bag of butter salt would have to wait for another day. Remaining in the car while Shelly shopped in Costco was a no-brainer for me. I only ever went in for the free food samples but I really didn’t think I could hold anything down. My stomach felt awful queasy.

I did my best to conceal my illness from my wife, and think I did a pretty good job. At least, until we hit Fort MacLeod on the drive home. That’s when the diarrhea hit, turning the remainder of the trip into the longest 1.5 hour car ride in my life. I must admit, Shelly was pretty decent about the whole episode. There were no sympathetic gestures turned my way, but she spared me her favorite healthy eating lecture as well. An excellent trade-off.

“You’re never too old to chase your dreams”. That’s the mantra of writer Terry Hume.