You are here: Home / People-Places / Celebrity / The Music In Me Plays On

It was my mother who passed on her love of music to me. She showed me that the magic of great music came from the heart. I learned that a terrific song has everything in balance: the tune, the words, and most importantly, a singer – capable of interpreting it for others.

For example, Elvis had about 50 top-ten hit songs and never wrote a single one. Why? In my humble opinion, Elvis internalized a song so well that whatever was meaningful to him, was relatable to anyone.

‘MY WAY’ by Paul Anka’: Canadians fans know a great tune when they hear one… especially when it’s from a “hometown” boy. He didn’t create the melody; but, as a superb lyricist, he changed the original meaning of the song – popularized in 1969 by Frank Sinatra.

I’ve listened to it sung by Sinatra, Elvis (even Anka himself) and my preferred version is from Elvis. Once he decided to vocally lean into a ballad or gospel tune… well, mom was right: they didn’t call him “the king” for nothing.

It’s hard to say where he sent you; but, better have packed your emotional bags, it was a trip. I just know that his version brought a tear to my eye within the first few words.

‘HALLELUJAH’ by Leonard Cohen: It would be a rare Canadian who doesn’t know of our nation’s poet laureate. And, although, he won Canadian Male Vocalist of the year – which he joked could only happen in Canada – the great man was reduced to tears when singer extraordinaire, K.D. Lang, performed her definitive rendition… part of a televised tribute.

And, who can forget K.D.’s “gold medal” performance of the song at the opening ceremony of the Vancouver 2010 Olympics? Talk about there not having a ‘dry eye in the house’… what about the world?!

‘WOMAN’ by John Lennon: In his last interview, at age 40, the man of peace said he had precious little of it as a young man: he fought men and hit women – something he sorely regretted.

That’s what I find both amazing and remarkable – that he could admit this and write this beautiful song as a consequence. We all have pasts; but, that doesn’t mean we necessarily learn from our mistakes… mature and grow as adults. But, after reading his words of repentance, I believed him. It’s what makes ‘Woman’ much more than a typical “rock and roll” love song. History shows he beat the booze, the drugs, the crazy life style and, together, found peace with his wife Yoko.

“Woman, I know you understand
the little child inside the man
Please remember my life is in your hands”
~Woman by John Lennon

Interestingly, it was another Lennon original – ‘In My Life’– that my daughter Jessica chose for the traditional Father/ Bride dance at her wedding. Looking back, we were ‘talking about my g-g-g-generation’… while celebrating hers.

Throughout his life, Lennon sang with deep understanding and vulnerability, and reminded us that big boys don’t cry, but men do. 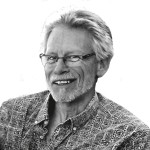 Fred Parry lives in Southern Ontario. He is a lover of people and a collector of stories, music, wisdom, and grandchildren. His newspaper column, Music in Me, can be found in ‘The New Hamburg Independent’ Metroland Media. His book, ‘The Music In Me’ (2013) Friesen Press is Available from Amazon and Indigo / Chapters.