You are here: Home / Eco / Botanical Communication: How Trees “Talk” to One Another

Nature is full of powerful networks of communication and symbiotic relationships that enable our planet to thrive. It is difficult to understand how so many things can be kept in harmony in a dense forest without any form of communication. It is no wonder that researchers have discovered that plants, in particular trees, do actually “talk” to one another. To gain a deeper understanding of nature, it does not always require using strict scientific methods — using your intuitive knowledge can aid in gathering information as well.

Ecologist Suzanne Simard from the University of British Columbia has conducted research on the language of Douglas fir and birch trees. She found in her thesis work that there is a fungal underground network that connects communities of trees within a forest. It is similar to the neural network in our brains, with hundreds of connections being made simultaneously. Simard found that the trees conduct resource transfers of vital nutrients such as carbon, trigger defense signaling, and have kin-recognition abilities.

The nutrient exchange shows a mutually beneficial relationship between the two types of trees in her study. The non-photosynthesizing fungi feeds off the carbon produced by the trees. It transfers the nutrients based on environmental factors such as sunlight availability or parasites that may be present. For example, when Douglas firs get too much shade in the summertime, carbon is transferred from the birch trees to the firs. Similarly, the firs transfer carbon and nutrients to the birch trees in the fall when they lose their leaves and lack the ability to photosynthesize and create their own food source.

Simard believes, by exposing that trees have the humanistic quality of communication, it helps others to connect to forests in a deeper sense. Through her research she found that older trees, named “mother trees,” have more connections to other trees in the forest and are more valuable to that ecosystem. Protecting these mother trees helps to reduce air pollution — a rising concern among environmental engineers. It is her hope, as more people understand how valuable old growth trees are to the health of a forest ecosystem, they will become more likely to participate in conservation and preservation efforts.

Simard was interviewed by the Yale School of Forestry and Environmental Studies about her research. She was questioned about using terms like “forest wisdom” in her scientific papers to which she replied, “I have always been very aware of following the scientific method and of being very careful not to go beyond what the data says. But there comes a point when you realize that that sort of traditional scientific method only goes so far and there’s so much more going on in forests than we’re able to actually understand using the traditional scientific techniques.” 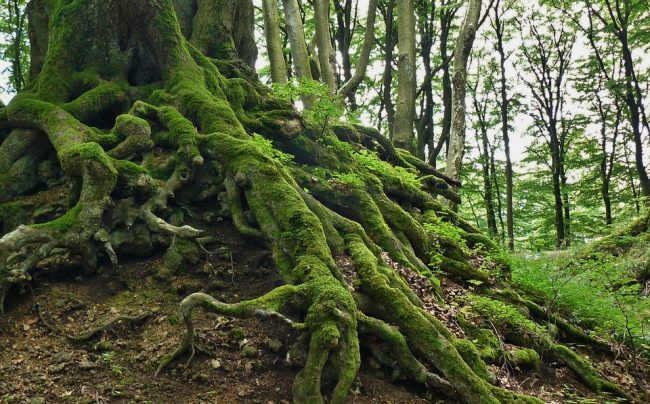 We learn so much from nature which we have been wise to mimic, known as biomimicry, in our industrious efforts such as architecture and technological innovations. However, nature is also full of mystery that has yet to been uncovered. There are many inexplicable phenomena that occur in an ecosystem that some believe are better left unknown.

Intuitive healer, Susan Tyler has been keeping company with trees long before Simard began her research. Just like scientific findings are open to interpretation, so are the signals that Tyler receives from the trees. Tyler believes that anyone can communicate with trees if they can create a space within their minds to become available to it. She described her method for anyone to attempt as follows:

“Start by looking at the tree’s energy. Look at the outer edge of the leaves of the trees. Soften your gaze, you will start to see energy spikes as trees are talking to each other. You are looking at it without looking directly at it. Look at the space outside the physical shape you are seeing and you will notice a greyish shape around the tree. All of a sudden you will see a spike. That is them communicating with each other and sharing information.”

Although Tyler knows that the trees are capable of managing themselves, she still receives calls for help from the trees on her property. Most recently, one of her oak trees was being outcompeted by a neighboring blue spruce. It sent out a distress signal. Tyler relocated the oak tree, and now both trees are thriving in their separate spaces. She was surprised by this interaction because she claims that she does not typically get as much information from the oak trees as she does from the evergreens. She says “It could just be me but the evergreens are pretty chatty. They love to be touched and they receive praise very well.”

Tyler and Simard are not the only people to be fascinated with the language of trees. Peter Wohlleben is the author of the book “The Secret Language of Trees: What They Feel and How They Communicate”, a bestseller in 11 different countries. He unveils how the interactions between trees are sophisticated and questions what else trees are communicating about that we fail to understand. He also recognizes the value in aiming to further understand botanical communication.

Learning more about science and how to blend our intuitive knowledge can be a powerful partnering and offer a new way of looking at the botanical world. If you are aiming for a greater understanding of the natural world, communing and communicating with nature can help you to achieve that deeper connection. Open yourself to the trees and listen to what they have to say.

Photos are is pixabay creative commons

W.M. Chandler is a Colorado native and works best with her head in the clouds. She is an avid researcher and enjoys writing about unfamiliar subjects. She writes passionately about nature and the outdoors, human connections and relationships, nutrition and politics.