I am sitting next to Bou Meng, a lean man in his 70s, who had the unique, rare fate of escaping being murdered in the Khmer Rouge S-21 prison camp in Phnom Penh. Once a high school, the complex served as a murder factory for Cambodian dictator Pol Pot in the late 1970s, and is now a genocide museum.

Mr. Meng describes how he was tortured—with electrical shocks and beaten with electrical cords, similarly to over a million other men, women, and children…all for no other reason than the paranoia of a despot. The atrocities were committed mainly by young boys (and some girls) from rural areas aged 15 to early 20s, who were indoctrinated by the mad doctrine of Saloth Sar (later known as Pol Pot), the General Secretary of the Communist Party of Kampuchea. Like many of the higher echelon of the party, he had studied in France, though not with much success, having flunked out three consecutive years before being expelled.

The brutal commandant of S-21 was Kaing Guek Eav, alias Duch, who was brighter than Pol Pot, scoring second highest in the country on general math testing and later becoming a math instructor.

Ironically the millions  targeted for death were the educated, because they were supernumerary and not useful the to the agrarian state envisaged by the Khmer Rouge. Wearing glasses was a criterion for execution…

One of the interrogation rooms in the S-21 has been left intact. A simple chair and desk in front of which sits a metal bed frame and shackles. 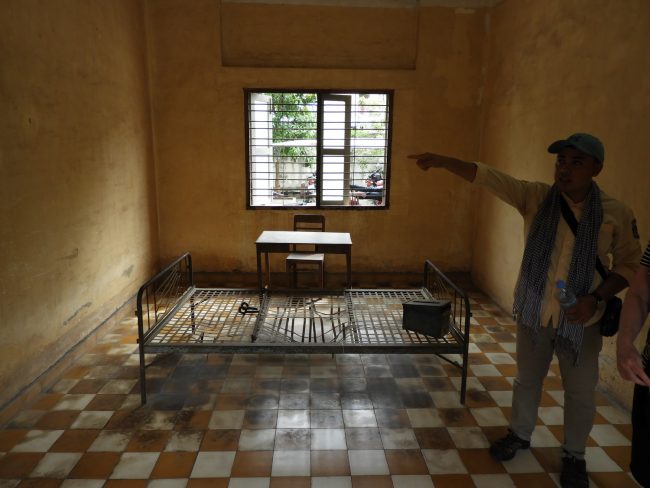 Inmates could choose whether they wanted to be shocked, or beaten with electrical wire. After all, Pol Pot’s state was called Democratic Kampuchea. 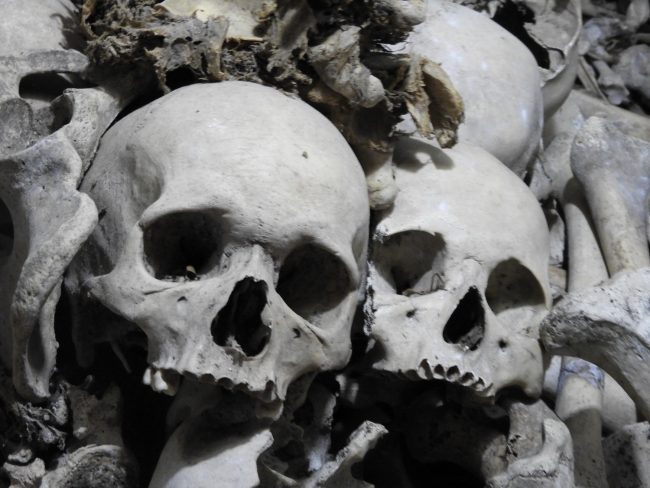 A poster of a disemboweled prisoner sits on the wall to the right of the desk.

The prison cells of S-21 are otherwise empty now, with the exception of the haunting photos of the men, women, and children who died there posted along each corridor. The fronts of the buildings were covered in barbed wire fencing to prevent prisoners from taking the easy way out by jumping from balconies and committing suicide. One building still sports this grim facade. 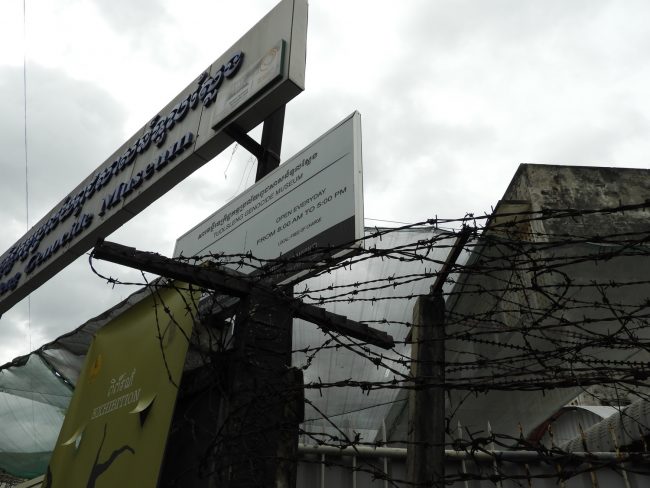 Mr. Meng’s life was saved by his artistic talent. Duch wanted someone to draw a portrait of Comrade Pol Pot. As an incentive, the successful candidate would not be executed. The artist’s test was simple. He had to draw a portrait of Pot that was indistinguishable form a photo. The painting was photographed and enlarged and a panel of judges had to try to distinguish the painting from a photo. If they could not do so, then the candidate lived… if they could, he would be immediately killed.

Meng passed the test and was left alive long enough to be rescued at the fall of Pol Pot’s regime in 1979, along with only half a dozen others of the thousands that had passed through the camp.

The bones of all the others rested in the “killing fields” of Choeung Ek. Prisoners were not deemed worthy of wasting a bullet, so there heads were bashed in with rifle butts, their throats slit, or they were simply buried alive in the graves they had been forced to dig for themselves.

In 2008, S-21 commandant Duch was put on trial before a tribunal for his crimes, along with other Khmer Rouge leaders. Meng had a chance to confront his tormentor again, after thirty years. The familiar refrain, “I was just following orders”, was heard again as at the Nuremberg Trials in 1945-1946. As then, those words did not provide a defence for genocide or cruelty.

There has been no formal justice for the many rank and file of the Khmer Rouge killing machine. Cambodians remembered some of the worst offenders, though, and according to Meng, many fell to machetes or were doused in gasoline and burnt alive by friends and relatives of their victims.

Pol Pot died in 1998 without ever being brought to justice (though he was about to be turned over to authorities and either had a heart attack, committed suicide, or was poisoned… depending on your sources).

Duch, however, will languish in prison for the rest of his life, thanks in part to the efforts of Mr. Meng.

Our guide, Sun (Houn Putrasmey), was fabulous. A member of the Association of Phnom Penh Tourist Guides, Sun can be reached at: hpr.rasmey@live.com

While visiting the museum, be sure to say hello to Bou Meng and get him to autograph one of his books for you. 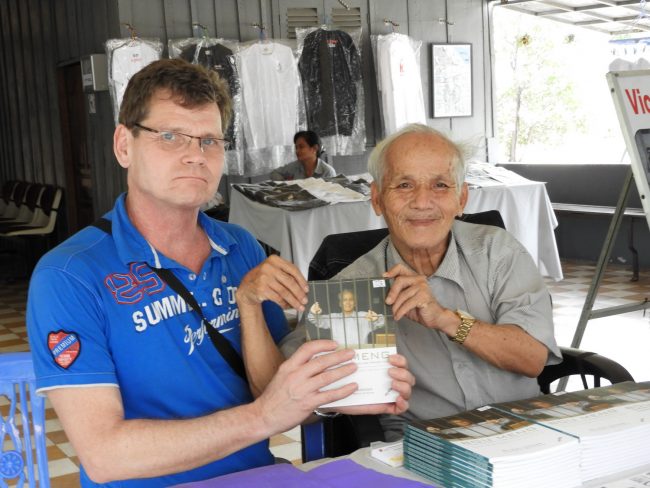 George M. Burden is a freelance journalist who has been a member of the Travel Media Association of Canada for almost 15 years. George has served as a Regional Director of the Explorers Club and was recently designated a ... Read Full Profile