You are here: Home / Arts-Culture / Creative Non-Fiction / The Impact of Sitting Volleyball: Part One

Embarking on a new relationship is a form of change but so, too, is going to the cinema to watch a film with no prequel from which to draw prior knowledge, starring actors and actresses about whom you may know nothing. Now, the likelihood is that facing one of these changes is going to involve a lot more commitment than the other; more time, concentration, introspection and perhaps some repairing of one’s fraught emotions as they bleed from one’s every pore at different moments, with different meanings, the path ahead forever unclear.

Indeed, going to the cinema can be a volatile experience.

But what about the changes in our lives that shudder toward us like bullet trains? The track-switcher is broken, swaying its metal arms in the wind like a drunken scarecrow, and we are tied to the rails. These changes charge – no, surge – toward us, and the consequences are for us to deal with. Pause. Take a look around. Maybe have a read of your diary, or the news; check your phone. What fresh tragedy unfolds, bereft of an explanation? What new law marches through your streets, its dust swirling before your eyes, blurring your vision? Do the sounds of today’s world translate into your life?

Two years ago, a man in Manchester, England, suffering constant pain in his left leg, was anaesthetized. He was a man who enjoyed driving, who had navigated gargantuan coaches across Europe, the roads becoming an intricate map in his mind no less memorable than the lines of his palms. He was a goalkeeper near-unbeatable at five-a-side football (soccer); he was a man who played badminton until the sweat of his determination dripped not just from him but from his racket and shuttlecock; a man with a love of geography and an uncanny ability to remember capital cities. When he came to, in a tragic trick of the light, his left thigh slept numb and scarred. But this was no trick. Perhaps looking upon it was like looking upon the hilt of a broken sword – the blade snapped and lost with just a small, jagged shard jutting from the crossguard.

Perhaps, in the moment of his awakening, the word ‘change’ became another kind of sword. This time the blade was long, edged, sharp – stabbing into his mind. The wounds inflicted were psychological. What happens next? How long will I be here? Will I be able to work again? Why can I feel a limb I no longer have? Was I right to finally agree to this?

Imagine one of those red, welt-like cuts that we have all suffered, the ones that are so red that they don’t even bleed. Imagine his wound was bloodless. Because to bleed would have been to answer his own questions, in catharsis and encouragement. Perhaps the realization would finally strike home that his basic joys – playing football (soccer), badminton, driving – were all under threat of becoming images he would only be able to call upon in memory.

A few weeks, hundreds of medicinal pills and endless painful winces drawled passed. For Paul Ledward, the early aftermath of his amputation was…use your own adjective. Tough? Long? Tormented? Exhausting? With friends around him, he was able to continue as part of a Thursday evening quiz team. Collected by one and driven home by another, he was able to continue to flaunt his geographical erudition. Yet the badminton was gone, the football seemingly lost too.

The driving, however, returned like a shooting star in the darkness, a golden shimmer trailing its own positivity. With his right leg still fully-functioning, an automatic car was granted; the Volvo V40 replete with small, disability-friendly gadgets to enhance the quality of his driving experience. It seemed oddly fitting, too, that this Volvo blazed a vibrant copper colour everywhere it went. Go stand outside and count how many vibrant copper cars you witness passing by; you’re likely to see more ghosts.

Whether or not the loss of a limb can ever be adjusted to remains to be seen. But with a tailored car, a wheelchair, ostensible pain relief and a ramp installed at home, steps were being made in an attempt to repair Paul’s quality of life. The next step came in the guise of sport. Namely, sitting volleyball.

For those of you unfamiliar with sitting volleyball, it is a Paralympic sport. It was first exhibited at the 1976 Games in Toronto as a demonstration before becoming a medal-winning sport in all of the Paralympic Games thereafter. It has become a game of skirmish and impact, with teams allotted only three touches to devise their strategy before the ball must cross the ‘no man’s land’ net that divides the court’s centre. Net touches are penalized, and for a hand to ‘invade’ the enemy’s side is its own transgression. During net confrontations, big hitters swing mallet hands that hammer the ball, only to be met by a two-person, arm-raised wall. In a resounding crack! of leather against flesh, the ball bounces away like debris or shrapnel. Or, a player might opt for a delicate lob over the net player, caressing the ball like a newborn, sending the opposition sprawling backwards, reaching for a prize forever beyond their reach.

At London 2012, Bosnia and Herzegovina’s men lifted gold, while the Republic of China’s women sat at the summit of their sport. The United Kingdom’s governing body, Volleyball England, coordinates both a league and a cup competition. The league’s scores are accumulated over five Sundays of round-robin matches and the Sitting Volleyball Cup then takes place entirely on its own day. Six weekends for teams to progress, rivalries to blossom and for the quality of the game to improve.

A year ago, in July 2014, these competitions were blurs in a dream for Paul; shapes he couldn’t comprehend, might never witness. His first encounter with the sport was in a blustery town named Wigan, situated in the Greater Manchester region. He partook in a series of sessions catered by the Wigan Seahawks Volleyball Club – Paul, his niece Chloe and the coach were the only players. For a sport requiring twelve players on the court, three was…discouraging. The sports hall echoed its sympathy in silence.

“Set up your own club”, Volleyball England representatives suggested. “Funding will be made available”. Paul was put in touch with Howard Ainsworth, the coach of the Manchester Marvels Volleyball Club. After some discussion and the tossing back and forth of ideas, ball-like, Manchester Marvels Sitting Volleyball sparked free. All Paul needed now was more players.

While the sport at Paralympic level is exclusive to people with classified disabilities such as amputations, spinal cord and nerve damage and cerebral palsy, the national level immediately below that accommodates players who are able-bodied. This, in addition to Volleyball England’s encouragement of teams to be mixed-gendered, enabled Paul to broaden his search; to flash his light in all directions. Friends and acquaintances attended the first training session, although for some, the experience was momentary. 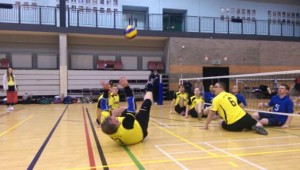 Of course, for most people, sitting volleyball was a brand new experience, and still is. It’s rarely televised and not replicated by children in the street like football, American football, rugby, baseball, cricket and hockey. Only a handful of websites ever mention, never mind devote resources to, the sport.

The motivation for some attendees quickly dissolved. This was, ultimately, understandable. The most successful sports have teams and players whose accomplishments extend to thousands of fans. In Manchester, the two football giants, Manchester United and new heavy-spenders Manchester City, are sporting constructs creating (as it’s preferred) friendly rivalries, family banter and role models for children. The hope is that they’ll walk in the shadows and try to reproduce a new skill or even add a new backheel or nutmeg (a pass through an opponent’s legs) into the formula. For Paul and his cohorts, not only was the game new, but so too was the game’s language. It was change. Pass became volley, assist became set, and shot became spike. And of course, in keeping with its name, the sport was played sitting down. With many players at Paralympic level (often amputees), the game needed to facilitate sport at an exciting pace without a person’s legs being essential (the cynics were quick to immediately doubt the game’s speed). Suddenly the arms and core muscles were under greater scrutiny. In this way, the sport could even prove challenging for able-bodied players of indoor and beach volleyball, who themselves continuously use their legs to sprint around the court, jumping to spike and block.

Shuffling and bottom-sliding can be a tough sell; this was not a turn-up-and-play routine. There was a new language to learn, new techniques to master. For families and other entrenched interests, the commitment the sport asked for often proved unappealing; however, for some, the new challenge has now been embraced. And of those people, I shall say more in part two. For now, why not visit our website for more information and some great photos. There’s encouragement at the end of this tale, I promise.

Shaun Carter is a Masters student at the University of Manchester, England. His hobbies include writing, reading, playing sitting volleyball and listening to progressive music. If there was more time, he'd surely do more. Read Full Profile