Like any red-blooded, meat-eating, sports-obsessed male, I didn’t want a Poodle—the long or the short or the tall. The breed was not on my Top Ten list of dogs. Or my Top One Hundred, for that matter. But Arlene, my wife, convinced me that owning a Standard Poodle would be a good thing. So two years after our manly Chow-Husky mix died, we acquired Cassie, a 45-pound female black Standard Poodle. Today, I consider the breed to be Nature’s best kept secret.

And I am not alone.

Many dog owners have been in on this secret for a long time. In fact, the history of Poodle ownership – Standards, Minis, Toys — is littered with famous names. John Steinbeck, as we all know, traveled around America with a Standard Poodle named Charley. Other writers who owned Poodles include Charles Dickens, Victor Hugo, Thomas Mann, Gertrude Stein, Erma Brombeck, Neil Simon, and James Thurber. Many Poodle owners will come as no surprise, from Josephine, the Empress of the French, to Marilyn Monroe to Mary Kay. Other owners, such as shirtless Vladimir Putin, are head-scratchers.

Knowing a natural-born people pleaser when they see one, Hollywood welcomed Poodles of all sizes with open arms. The number of La La Land celebrities who owned, still own, and loved Poodles is staggering. A partial list includes female stars such as Katharine Hepburn, Shirley Jones, Grace Kelly, Mary Tyler Moore, Ellen Degeneres, Barbra Streisand, and Debbie Reynolds, among others. Male celebrities, past and present, who had or have Poodles include Bob Hope, Sammy Davis Jr., Jack Lemon, Kirk Douglas, Cary Grant, Mike Nichols, Robin Williams, and Vincent Price, to name but a few. Admittedly, a good number of the Poodles pampered in Hollywood represent the smaller models but Standards appear to be well represented in the collection.

John Heisman, one of America’s most popular college football coaches and the namesake of the coveted Heisman Trophy, had a small Poodle named Woo, which was often found on the sidelines during games and in team photos. Oscar Hammerstein, the famous American composer of such works as Oklahoma!, The King and I and The Sound of Music, owned a black female Standard Poodle. Billie Holiday had her Standard Poodle cremated in her favorite mink coat.
It is said that Alexander Pope, the famous 18th century poet, was saved one night from a sure execution when his Poodle stopped a break-in at his house. According to the story, which some people have questioned, one of Pope’s servants had entered the house after hours with the intent to kill the poet. The dog flew himself at the intruder and held the man by the throat, thus preventing both the murder of his master and a premature end to some rather famous rhymed couples.

Man’s best friend doesn’t get any more loyal than that. 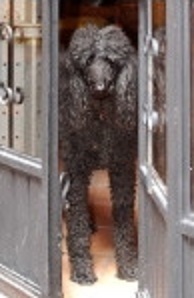 Standard Poodles are hardy and strong, and they like to pull. An Alaskan named John Suter ran a team of Standards in the Iditarod many years back, and they performed quite well. His first team to include Poodles finished 38th out of 52 in a race where just finishing is considered a victory. At some point, the Iditarod folks changed the rules so that only “northern breeds” could compete and that was the end of that. I like to think the Poodles were in the lead in the Iditarod until they hit that first saloon with a cheese spread and show tunes on the jukebox. They know their priorities.

When Sir Winston Churchill’s much-loved Poodle, a Mini named Rufus, was run over by a car and killed, a fan offered him one of her pure-bred bulldogs. She was appropriately thanked and politely told, “If Mr. Churchill has another dog it will be a Poodle again.” I fully understand the sentiment, for having Cassie, our first Standard Poodle, ruined us for any other breed. Duke, our second Standard, sealed the deal.

I’ll write more about those two amazing dogs next time. 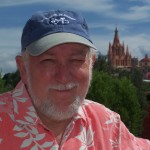 Mark Saunders prefers to write short, humorous pieces befitting his height and attention span. His humorous memoir about dropping out and moving to Mexico, Nobody Knows the Spanish I Speak, was voted the #2 book in San Miguel in 2012. An award-winning playwright, screenwriter and cartoonist, Mark is a former winner of the Walden Fellowship, awarded to three Oregon writers or artists each year. Back in his drawing days, more than 500 of his cartoons were published nationally, in publications as diverse as The San Jose Mercury News, Writer’s Digest, The Saturday Evening Post, and Twilight Zone Magazine. He once owned a Yugo (please don’t ask about the car). Mark is currently working on The Duke of San Miguel, a sequel to his humorous memoir about life south of the border.