You are here: Home / Travel-Adventure / Adventure / The Bungy Jump Master, WildPlay Element Parks, And Me

This summer, I forced myself to dive off a bridge.

It was 150 feet from the chocolate-coloured bridge deck to the moss-green river below, and I stopped just inches before my fingers touched the surface of the water. I rebounded 75 feet or so, and then began another gut-churning descent. I ended up dangling in space as though I were a prize fish, or perhaps a confounded walrus.

I was, of course, conquering the Bungy Jump at WildPlay Element Parks on the Nanaimo River, about fifteen or twenty minutes north of Ladysmith, just off the Island Highway. WildPlay is a client, and I had been sent to the Park to learn more about the type of “Elements” or adventures that the BC-based adventure recreation company offers across five British Columbia and one Yukon locations.

Intellectually, I understood that I was “going to go bungy jumping and climb trees and stuff” when I set off from Victoria that morning, but the sight of the looming Bungy Jump bridge didn’t make things any more real. Jumping off a bridge was still an abstract concept, and therefore still safe to contemplate as something that could be done before lunch.

An iconic, steampunk sculpture of flowing heavy metal, the Bungy Jump bridge itself arcs above the Nanaimo River, stretching across a narrow, forested gorge that is as deep as a 15-story building. A steep, wide flight of stairs leads up to the bridge deck and the bungy jump-off point – it’s so steep it seems to block out the sky entirely. 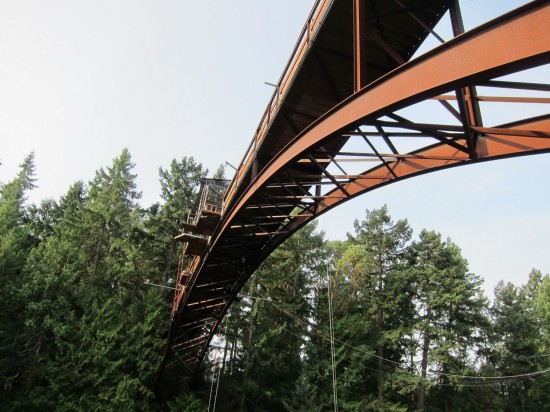 Looking around me, it turned out there is more to this park than just Bungy Jumping – there are four of WildPlay’s “Elements” in all: the “DragonFLY Zip Lines”, tree-top courses for adults and kids called “Monkido Aerial Adventure”, as well as the “Primal Swing”.

And, as I would also find out, if you have no interest in bungy jumping or heights, watching others take the plunge is almost like a spectator sport – complete with cheering, chanting, clapping and plenty of hooting.

The WildPlay Nanaimo staff arrived and they were impressive in their efficiency: the team was young and knew what they were doing, and if not quite martial in demeanor, then at least very earnest and focused, attention to detail and their decree that you follow the rules and avoid winning a Darwin Award.

It turned out that I wouldn’t start out on the Bungy Jump after all, but would first graduate from the relatively simple activity of zip-lining through the more technical challenge of the Monkido Classic. After that I could do the Primal Swing or Bungy Jump… or back out if I had cold feet.

Zip-lining provided an introduction to the basics of the day: how to wear a safety harness, how to keep your balance on the zip lines which would be an integral component of the Monkido course, and how to land. Zip-lining across the canyon was a blast, and was a great lead-in to the Monkido Classic, which is essentially an elaborate obstacle course and zip line combination of games that rise six to sixty feet high into the tops of the Douglas fir trees surrounding the park.

A lot of children seemed to be enjoying the Monkido Aerial Adventure – a lot more than I was. I discovered that I’m a little afraid of heights, which made me wonder how the Bungy Jump was going to turn out.

So I climbed the steel stairs to the top of the bridge. 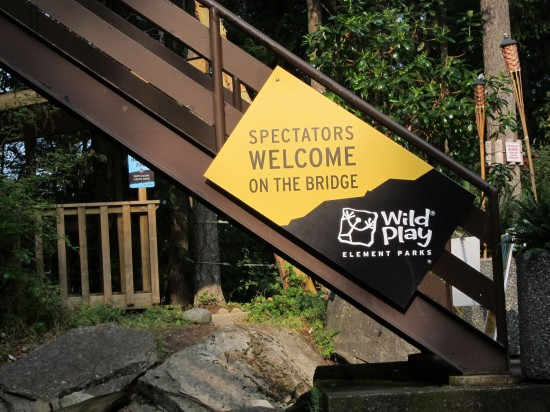 It was midday and getting hot. The sky was deep blue, and the surrounding forest smelled of warm trees. The two bridge crew employees were busy – they were getting a mother and daughter ready for the Primal Swing ride. The pair of guests sat down on the edge of the bridge and were strapped side-by-side into bucket seats. A cable was hitched to their full-body harnesses, and the bridge crew asked them if they were ready. They were. Suddenly, tension increased on the cable, literally pulling them with what seemed like terrific force towards the open void.

“One, two, three – swing!” The bridge crew released their grip on the guests, and they catapulted into space; a split second later I could hear them both screaming with fright and evident pleasure. After swinging through the canyon for a minute or so, they were retrieved by a WildPlay employee in a boat. 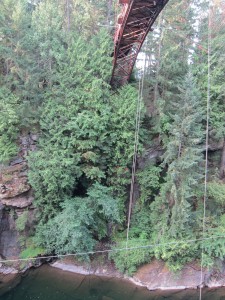 “Now it’s your turn,” said the older of the two bridge crew. He wore wraparound shades, a gruff beard, and a calm, amiable expression that put forth a strong sense of competence. His partner was young, but tall and athletic, and possessed the no-nonsense, authoritative presence of a football quarterback.

They led me to the Bungy Jump launch spot. Far below, on the side of the canyon, people were gathering to watch. A few clapped and cheered. It dawned on me that I might choke.

I pondered this as I sat down and the bridge crew bound my ankles together, connecting me to a giant white bungy cord. It was time to jump… if I wanted.

The bearded employee looked at me. He was known as the Bungy “Jump Master”; he had worked here for over fifteen years, and was revered as something like a guru or a mystic by the other WildPlay staff. Supposedly he could help anyone muster up the courage to make a jump, and often fulfill a lifetime dream.

“Do you want to get your head wet?” The Jump Master asked me.
No, I said. I have nasal problems and don’t like getting water in my ears. The Jump Master contemplated this for a minute.

“Okay, we won’t dunk you in the river. Now, the only thing to remember is that you need to try to dive when you jump – this prevents a lot of bouncing around later. That’s it.” 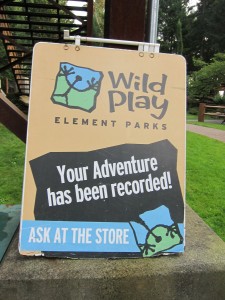 I looked down. There was nothing between me and the cold green water below.

“Are you ready?” asked the Jump Master. I said I was, and he released the bungy cord, letting it slip over the side of the bridge. It must have been heavy, because the weight of it exerted a noticeable pull on my ankles towards the edge of the bridge, less than an inch from my toes.

I realized that my life insurance policy had expired the week before. What if the line broke in a freak accident? I might collide with a large bird like a goose or an eagle. What would my wife tell her friends?

The ride down was a quick trip, and everything was a blur of motion (I had taken off my glasses). While bungy jumping is definitely a low-impact sport, as I approached the vertex of the jump and shot back up for another, short rebound fall, the pressure on my legs and back was noticeable. I bobbed around for a minute or so, before coming to a rest upside down, several feet above the river. The blood rushed to my ears.

That was the cue for a WildPlay employee to come and get me on a special inflatable raft. She quickly and expertly removed me from the bungy cord, and my adventure was complete.

The crowd above applauded and whistled. It was time for lunch.

All Photos By WildPlay LTD. – All Rights Reserved 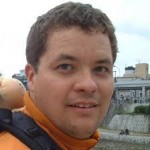 Nevin Thompson is a marketing writer in Victoria BC, and wrote this on behalf of WildPlay Element Parks, an outdoor adventure recreation company with Parks located throughout BC and the Yukon.