You are here: Home / Arts-Culture / Edward Bernays and the century of Me 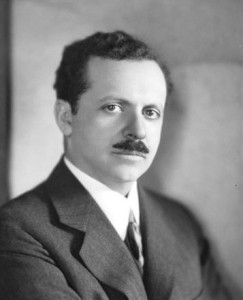 Picture this: a world where people only bought what they needed, not what they wanted. Cars all came in basic black with no extra anything. Clothes were purchased for practicality alone, not for what they said about you. Politicians campaigned on issues and the marketplace was devoid of unessentials, except, of course, for the rich who had money for luxuries beyond the day-to-day outcroppings necessary to survive.

Then came along Sigmond Freud. More specifically, his nephew, Edward Bernays, and the individual would never be the same again.

Recently I discovered the excellent BBC series, The Century of Self, that documents Bernays’ influence in the American marketplace and also the growth of the consumer (a term first used in the 1920’s) in western society. Bernays was the father of public relations. In fact he coined the phrase; the word “propaganda” had too much of a negative connotation. He had his fingers in so many pies in the past century that it would be difficult to find a sector untouched by his beliefs or campaigns. He was instrumentally in getting women to start smoking in the 1920’s and using Betty Crocker cake mixes in the 1950’s. He schemed the overthrow of the democratic regime of Jacobo Árbenz Guzmán in Guatemala during the Truman administration to support United Fruit Company and arranged a pancake breakfast with Calvin Coolidge in what is considered one of the first media events for a president.

Bernays built his entire career in public relations on the ideas and tenets of his learned uncle, Sigmond Freud. Freud developed psychoanalysis and gave us such terms as “libido”, “ego”, “id” and “subconscious.” He felt the self was a dangerous commodity. Beneath the surface of all beings was a wanton, lusting, violent self that had to be contained, had to be molded into the mores and expectations of society as a whole if the society was to survive. Freud and Bernays believed that the horrors of the First World War were related to these suppressed tendencies and if a select group of people could guide the masses, order and harmony would be maintained in the culture. In his 1928 book entitled Propaganda, Bernays writes: “The conscious and intelligent manipulation of the organized habits and opinions of the masses is an important element in democratic society….In almost every act of our daily lives, whether in the sphere of politics or business, in our social conduct or our ethical thinking, we are dominated by the relatively small number of persons…who understand the mental processes and social patterns of the masses. It is they who pull the wires which control the public mind.”

Fast forward to today. Cloud Atlas, the powerful 2004 novel by David Mitchell and now a feature film, speaks to centuries of attempts to control Bernays’ “public mind.” We see time spread out like a patchwork quilt, stories and characters connecting through themes of survival and marginalized existence, subservience and exploitation. The future world is entirely controlled by a few powerful people where corpocracy is a religion and humans are consumerholics.

The book and the film make it clear that the future is not some sci-fi soylent green tomorrow land. It is now. GMO foods and mega-malls, iPhones and nanosecond new technology. Craving and suffering have been with us for eons of time, but consumerism has become a new forum for dehumanizing and lessening the value of all beings. Consumers are the parishioners to big business’s church of propaganda, or perhaps, more accurately, the addicts to corpocracy’s dealers where the insatiable hunger for satisfaction is rampant and the drug of choice is materialism. Cloud Atlas is a stunning wake up call for the environment, for humanity, for this shrinking planet we all call home. It’s a luminous reminder that we are all connected, that we all need each other and that we are not alone.

Read about Lana Wachowski, one of the writers and directors of Cloud Atlas, and her brave commitment to being truly herself.

BBC’s documentary, The Century of Self

Tess Wixted was born in California and found her way home to Canada. A former writer and cat wrangler, she now cultivates a life of monastic work, play and meditation practice on 80 acres of off-grid beauty at Read Full Profile