You are here: Home / Feature / A Helping Hand
Kane Ryan of Dirty Wall Project pays tribute to Ashley Pereira, who by his single-minded devotion to the people of Mumbai’s Saki Naka slum, has transformed an entire community.

It’s nearing midnight in Mumbai as Ashley answers the phone, his voice tired and strained from hours spent at the hospital. I can hear the familiar sounds of Mumbai traffic through the receiver and can instantly imagine the heat and the chaos that surround him. I am watching the rain pelt my window; its noon here but there is no one on the street. I’m worlds away from India and frustrated that I’m not there to help.

In 2008, I landed in Mumbai, excited and in awe of the mega machine that some how entangles 20 million lives, each trying to find their way amidst the chaos. I had no idea that first day as I looked out the cracked window of the ageing taxi, passing tin shacks, slums and high rises, that this city would come to mean so much to me. Unbeknownst to me, during that very first ride from the airport, I would pass right by the Saki Naka slum where, beneath the bridge, a man named Ashley Pereira stood proudly outside the one-room slum school, watching over hundreds of families like they were his own.It would be more than a year until we would meet.

In the first year, Dirty Wall Project (DWP) accomplished more than I thought possible. DWP set up health camps in Rajasthan and serviced over 2500 people with free medical diagnosis and medication, and I had just completed my second fundraising drive in Canada. I was eager to tackle the big city and find out what Mumbai was really like.

I spent my first week with Ashley meeting the community and hearing the struggles and joys of working in an urban slum. Ashley is a native of Mumbai, born and raised in Marol Naka. Ashley spent time working overseas in Dubai, but always felt the call to help others. Arriving back in Mumbai to settle, he met with a small NGO (Non Government Organization) called Janvi Trust. It was here that he would find his true calling. Initially he set up health camps and dealt with individual medical cases but he wanted to contribute something more permanent and lasting. 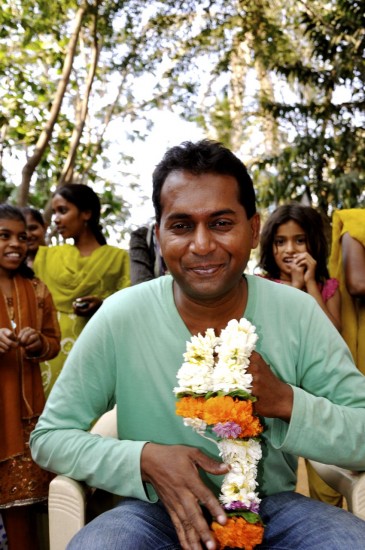 Janvi’s work was primarily in Saki Naka. A friendship with Shalu and Suresh (read last post) formed and the young couple offered the use of the land in front of their home. Ashley set up a small “school” consisting of a few books and a bare patch of dirt. When the monsoon hit, he purchased a tarp and continued to teach the children. Slowly, as he grew to know the community, Janvi’s work expanded. Janvi purchased the small plot of land in front of Shalu and Suresh’s home and slowly started building the first school in this pipeline slum. A few months later the school and Janvi became a permanent pillar in the community.

Over the last 10 years Ashley has worked 15 hour days and been on call to a community of thousands. The Saki Naka slum has been transformed by his single-minded devotion to the people who live there. Once the school was complete he turned his focus on the garbage strewn area in front of his school. Over the next five years, as funds trickled in, he developed the unusable land into a beautiful garden. Bright colors and beautiful plants replaced discarded plastics, feces and garbage and the community had something to be proud of.

The amazing thing about Ashley is that he somehow manages to listen to every ones problems and in an urban slum in India the line of people that need help is endless. In my time with Ashley, I have witnessed him help in every conceivable way whether it be land disputes, domestic violence, medical, educational or simply helping illiterate people sign forms or pay bills. His phone is always on and almost always out of batteries. Ashley routinely answers phone calls in the middle of the night from grief stricken mothers in need of help and somehow finds a way to get them what they need. What amazed me is that he managed all of this with little to no funding. I was instantly inspired by the way he worked, one man against all odds doing everything he can without the need for recognition or reward.

Kane with Ashley, Dirty Wall Project in IndiaBeing fairly new to this work, I was in awe of this selfless man. Social work is difficult on a good day but social work in a slum community is a whole different game. DWP is now in the second year of operation and Ashley and I have been working side by side for the past year.

Every good band needs a front man as does every charity, and over the last year I have become the face of our hard work as the Indian media has started to recognize our work in the community. The Mumbai Mirror, the Times of India and the Mumbai Mid-day papers have covered stories on our slum clean-up projects in Saki Naka. While this is great for both of us, it has left me frustrated. The focus is always on me and what I’ve done to improve the lives of this community.

Ashley has spent 10 years working under the radar for this community doing everything he can with little help. For me to cruise down and take all the credit after just a year isn’t right. The media is interested in the efforts of a lone white man, out of his element, heading into a developing country to help the underprivileged. Look at recent books like Three Cups of Tea or Shantaram, or popular movies. I truly appreciate the coverage we have received and respect the journalists who I have met along the way, but, I don’t deserve all the credit.

There is no doubt I work hard and face different stresses than Ashley. I’m in a country where I don’t understand the language, helping people who have a different value system and culture. I am constantly trying to understand and navigate the endless cultural differences that separate me and the people I strive to help.

But let’s focus on Ashley, a man completely focused on helping his own city and countrymen. He does this not to gain media attention but simply because he truly believes he has the means to help. If you calculated Ashley’s hourly wage with the hours he puts in, he would make less than the people that he helps day in and day out. Social work in India is difficult and many times a thankless task. The stress and mental fatigue of being a constant witness to horrible situations take a toll.

Ashley is not only my friend but the sole reason I am able to do the work that I do in Mumbai. I have learned, watched, and been amazed by his work ethic. Every decision DWP makes usually begins with a discussion in a bumpy, gas-wheezing, rickshaw ride on the way to a hospital or school. I rely on his knowledge of the community and the many religions and cultures that I am still learning.

Together, Ashley and I have improved on the foundation that his 10 years of sweat and hard work provided. Ashley’s small school has doubled in size thanks to DWP funds, as well as the number of families we are able to help. The Saki Naka slum is clean and beautiful, providing an inspiring model for other slum communities and NGOs. But, more than this, it is the knowledge I have gained while working alongside this humble man. Knowledge that I can take with me to other communities and hopefully pass on to the next generation of the willing.

So, here is to my friend and working partner, Ashley Pereira, a man who works tirelessly in areas most people pretend don’t exist.

Times of India – Dirty Wall ProjectRead Payal Talwar’s feature article about Kane, Ashley and their work in Saki Naka in the Sunday edition of the Times of India (April 2011).

Kane Ryan started his nomadic lifestyle at the age of four when he travelled for two years with his parents in a volkswagen van throughout Central America. He was born in Calgary and moved to Victoria with his family and ... Read Full Profile