You are here: Home / Humor / Being Bennie: Life with a Wise-Ass Parrot

Four years ago an alien arrived in my living room. It was grey with big black eyes, scaly feet and feathers. It spoke English and could bite, hard. It also said “I love you” and would run around the house screaming “Help, Heeeelp!” when it was time for a bath.

This alien is a 21-year-old African Grey Parrot named Bennie. She came to our house for a holiday and never left. Since she arrived, she has become a much-loved member of our family. I could not imagine life without The Benster, and that’s good because she could possibly live for another 45 years.

Before Bennie, I was  afraid of bi 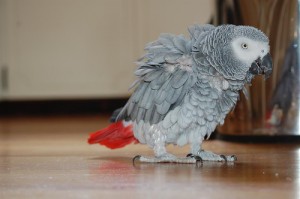 rds, enough to make me hide under the bed covers when a sparrow accidentally flew into our house. But Bennie has a way of winning hearts and it wasn’t long before she won mine, even though I later discovered the cute dance she liked to do for me was actually a mating dance! (A side note: People wonder why Bennie has a guy’s name. The truth is, Bennie spent most of her life as a guy until she was “sexed” and found to be female. Who knows what weird problems this created in her self-identity: she talks in both male and female voices.)

Bennie is amazingly smart. She doesn’t just imitate — she communicates with intent, and with cognitive meaning. Just ask our dog. Bennie has appointed herself the boss of the dog. She tells the dog to “sit down and shut up” and “git”. I have walked into our living room to find the dog cowering at the foot of Bennie’s stand as the bossy bird berates her: “You bad dog, what are you doing? Lie down, you bad dog.” Where does she get this from? We don’t talk to our dog like that!

She can call everyone in our family by name, except for the cats. To Bennie, every cat is called “Shadow.” Once I was driving to work with Bennie in her cage beside me in the passenger seat. About five miles from home, a cat ran in front of our car and barely escaped. “Shadow! Uh oh!” Bennie called.

When Bennie is cold she says “Brrr” and when she is happy she congratulates herself by saying, “Good girl, Goo Goo Ben.” We don’t know why she says Goo Goo, perhaps as an abbreviation for Good. She loves jokes. When she trips or drops something, she says, “Shit!” and laughs and laughs.

One of Bennie’s best moments took place when we were watching Lord of the Rings on video. As Aragorn leaned in to kiss the elf princess, Bennie piped up, “I love you. I love you”, adding in a flurry of kissing sounds.

She definitely likes love not war.  When voices are raised or guns are firing on TV, Bennie often yells, “You shut up, you bad.”

African Grey parrots are widely known to be amongst the most intelligent animal species. This has been confirmed by scientific tests, most notably by Dr. Irene Pepperberg and the African Grey she worked with for 30 years named Alex.

and Alex demonstrated that African Greys have the ability “to associate human words with meanings, and to intelligently apply the abstract concepts of shape, color, number, zero-sense, etc.”

I am reminded of a time two and half years ago when our old Golden Retriever Sandy was dying of cancer. She was lying on a blanket on the floor and it was clear she had only a few hours left. Bennie watched quietly for a long time from the perch atop her cage. Then she climbed down onto the floor, walked over to Sandy and made a sorrowful sound as she bowed her head. There was no doubt in anyone’s mind that Bennie knew exactly what she was doing. She was saying goodbye to her friend. She didn’t make another sound for about two days after Sandy died.

According to Dr. Pepperberg, African Greys perform many cognitive tasks at the level of dolphins, chimps and toddlers. “[Alex] possessed more than 100 vocal labels for different objects, actions, colors and could identify certain objects by their particular material,” according to The Alex Foundation.

“He could count object sets up to the total number six and was working on seven and eight. Alex exhibited math skills that were considered advanced in animal intelligence, developing his own “zero-like” concept in addition to being able to infer the connection between written numerals, objects sets, and the vocalization of the number. Alex was learning to read the sounds of various letters and had a concept of phonemes, the sounds that make up words.”

You can learn more about Alex and Dr. Pepperberg’s work in the book Alex & Me. The book gave me more insight into the remarkable minds of African Greys and inspired me to work harder at making life interesting for Ben. I create games for her and work on teaching colours and numbers. It saddens me to think of how many parrots are put in cages and ignored, or turfed out to pet stores because owners wonder why their birds are acting “bad.”

African Greys need as much love, attention and entertainment as human toddlers. And when they receive what they need, they are very giving, loving birds with great senses of humour.

They can also get you into trouble. One night, we had some friends over for dinner. The wine flowed until well past Bennie’s 8 p.m. bedtime, which she is religious about unless there is something good on TV. As our friends lingered over goodbyes near the door, I heard Bennie beginning to rustle around in her blanket-covered cage. I heard her sigh and click. Then she began muttering like a grumpy old man. As one of our friends kept talking, it was finally too much for poor Bennie. “Blah, blah, blah,” Bennie yelled out. “Good night.” 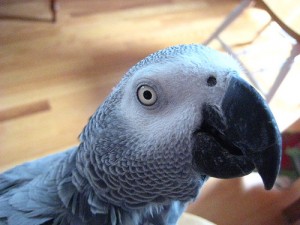 Bennie also likes to yell at the yappy poodles next door. “Shut up,” she’ll holler in a deep, authorative voice. “You shut up.” I finally had to tell my neighbour that it was my bird, not me, who was yelling at her dogs.

Wherever she goes and whoever she meets, Bennie makes friends. She has sat in on job interviews at the business I co-own. She has whistled at cute men (in fact, that bird has great taste in men, and she has danced the rumba at house parties).

I always love it when people come to our house and aren’t aware we have a talking bird. Suddenly, they will hear this voice calling “Hello” from the kitchen. And if Bennie doesn’t get an answer right away, she will then holler, “Helllloooo?”

Sometimes I do feel a bit like Dr. Doolittle. While Ben can occasionally be irritating (especially when she beeps like the oven timer for the 40th time) she is, on the whole, a pretty pleasant being to have around. As I write this, Bennie is covered up for the night but she’s still talking.

“Whatcha doin’?” she asked in a voice that sounds like Bobby Kennedy. “Good night. I love you. Goodnight, Goo Goo Ben.” And then, just for good measure, she whistles a few bars from “Old McDonald Had a Farm”, her current favourite song. She loves it when I sing, “Old McDonald had a parrot, ee eye ee eye oh.”

Alex and Me Book Jacket, The Alex Foundation

Previously published in all or part by, blackdotdiary.com, October 12, 2009, Used with Permission.

Kerry Slavens is a well-published writer whose genres include non-fiction, poetry, and fiction. She lives in Victoria, on an island just off the West Coast of British Columbia, with her husband, daughter, and menagerie of ... Read Full Profile