Rolling backwards off the Zodiac into the gin-clear, cold, late-August waters around Tobermory, Ontario, my scuba diving partner for the week, Dr. Bruce Cameron, and I part ways with the Royal Canadian Navy’s (RCN)  elite clearance divers. The clearance divers will spend the week on their annual proficiency dives and assisting Parks Canada at Fathom Five National Marine Park with retrieving underwater archaeology test materials and accurately sinking heavy railway-car steel wheels which are used as anchors for marker buoys. 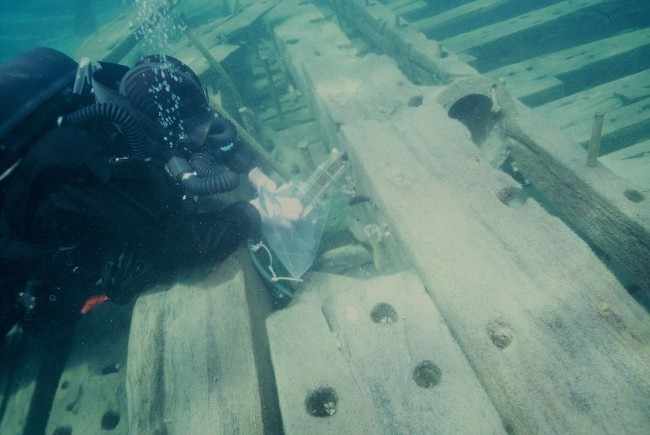 Bruce is the senior biologist at the Experimental Diving and Undersea Group (EDUG). All of the clearance divers with us are also posted at EDUG, which works in collaboration with the Canadian Forces Environmental Medicine Establishment at their Toronto Research Centre. EDUG falls under the Joint Operational Human Sciences Centre which is housed inside the Defence Research and Development Canada (DRDC) building at the former Downsview air force base.

The Commanding Officer of EDUG is Lieutenant-Commander Sean Galbraith; it’s Sean who introduced me to the fascinating research being carried out by his staff. Leading our group of thirteen for the week is Lieutenant-Commander Robin Walker, an exchange officer from Britain’s Royal Navy. Robin has served in the Royal Navy for 31 years, becoming a ship’s diver during 1992 and a clearance diver in 2002.

My main points of contact before, during and after the week of diving are Lieutenant (Navy) Troy Beechinor and Petty Officer 2nd Class John Penney. Troy has been with EDUG for four years; he and Robin are both employed as project officers. Troy deals with the air (scuba) side of diving while Robin oversees Mine Countermeasures which utilizes oxygen rebreathers. 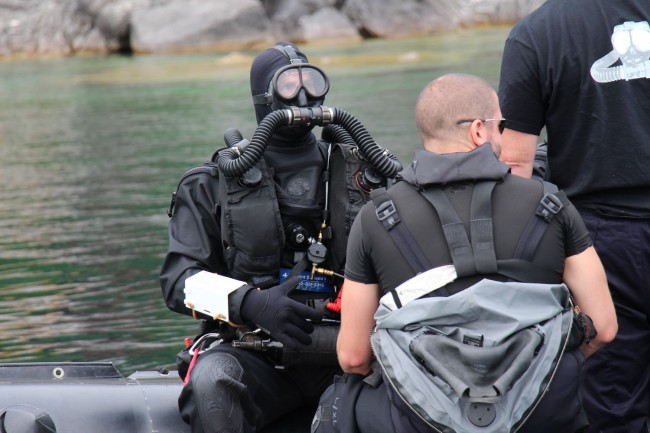 Tobermory is a great spot; with its cold water and excellent selection of dive sites at varied depths it allows clearance divers to fully exercise most of their equipment. While waters in the Great Lakes can be dark with limited visibility, the cold waters around Tobermory are as clear as any of the best diving areas in the Caribbean.

In the spirit of cooperation over the past four years Parks Canada has provided EDUG with a dock-side building where RCN divers can store and maintain their dive equipment for their week of diving at Tobermory. Until recently Parks Canada had a dive team in Tobermory and EDUG divers would provide assistance in dives over 30 metres in depth, which was beyond the maximum allowed depth for Parks Canada divers. Tasks on these dives would include survey work and replacing mooring lines that are located on or near historic shipwrecks.

With Bruce and I watching, EDUG divers recover scientific experiments that were attached to numerous shipwrecks by Parks Canada divers five years ago. These experiments will be used to determine the corrosion or decomposition rate of materials (wood, iron, etc.) found on shipwrecks within Fathom Five National Marine Park. Being involved with scientific research is part of EDUG’s DNA.

Anyone who is a scuba diver, in any part of the world, is familiar with the DCIEM dive tables. DCIEM is the former name of what is now DRDC Toronto, the home of EDUG. Mr. Ron Nishi at EDUG developed these internationally renowned tables after years of innovative and exhaustive research.

So what do EDUG and DRDC Toronto do today and what type of research will they carry out in the near future? First of all, this facility researches, develops and tests diving systems used by Joint Task Forces, Canadian Army (CA) Combat Divers, Royal Canadian Air Force (RCAF) Search and Rescue Technicians (SAR Tech) and all Royal Canadian Navy (RCN) diving operations. Civilian Defence Scientists, along with research technologists and technical staff, support research that covers a broad range of sophisticated diving and hyperbaric equipment, decompression table development for undersea diving and astronaut space-walk (EVA) activities, physiological investigations and finally, advanced medical care in hyperbaric medicine.

Remotely Operated Vehicle in the wheelhouse of the Niagara II.

Dedication and innovation are the hallmarks of EDUG. I was impressed by past accomplishments, current projects and the professionalism of EDUG members both inside DRDC Toronto and out in the open waters around Tobermory.

Joseph Frey is an Officer of The Royal Canadian Geographical Society’s Executive Committee and Chair of its College of Fellows. He is a former Director and Vice-President of The Explorers Club (New York City). Joseph ... Read Full Profile