Coming to Positive Reinforcement training from more traditional methods is called “crossing over.”  It’s not easy to cross over from more familiar and socially accepted forms of dog training.  There are lots of reasons not to consider it.  But many do.  In this series, Eric Brad looks at what it takes to “cross over.”

When it comes to choosing how to train their dogs, most people do what they have always done.  Especially if it worked for them in the past.  Others will seek out the advice of friends they believe are dog-smart or the local training clubs to give them some guidance.  And still others will turn to magazines, pet stores, or the internet to get whatever advice they can about how to get their dog to do this or that or, more likely, to get them to stop doing one behaviour or another.  It’s a rare thing in my experience to see a dog owner consider shifting their entire approach to dog training.

For me, it was a colossal failure of everything we had been using to train with one particular dog that forced a change on us.  It was find something new or re-home the dog.  But I think for most dog owners, all of this business about positive reinforcement, clickers, and training based on behavioural science can seem unnecessarily complicated.  When it gets talked about or recommended, it can all seem more than a little foggy.  After all my dog and I get along just fine, right?

Our dogs are only one aspect of our lives.  We have to balance them with our jobs, our personal lives, our families, and our relationships.  So it stands to reason that we all spend an amount of time we think is appropriate on working with our dogs to get them to fit into our lives as best we can.  Not everyone is trying to raise a “Canine Einstein” or the perfect obedience dog.  We have our goals and desires and we have what actually happens.  Our realities are very often a dog that is “good enough” based on the time and effort we could spend to help them work within our lives.

And this is where many of the things I’ve learned about dogs and training really made a difference in my life.  There is a saying that goes something like “Work smarter, not harder.”  The tools we discovered in modern, science-based dog training allowed us to do just that – work smarter. We spend about the same amount of time and effort training our dogs now but they have gone from “good enough” to great dogs.  All because we use a more effective approach.

Are you happy with the dog you’ve trained?  I’m sure you are.  You’ve done the best job you know how and even though she may not be the most clever “trick dog” in the world, you get along great.  So if someone told you that there was a different way to train that could make things even better, you would probably say, “No thanks, we’re pretty happy with what we have.”  Fifteen years ago I would have said that too.

The Culture of Discipline

“Obedience”, “Commands”, “Corrections” – It would seem that our dog sense comes from a culture of discipline.  When I was younger, I remember being taught that dogs needed to be shown that we were their “masters” so that bad things wouldn’t happen.  It turns out that dogs already know who’s in charge seeing as how it’s the humans that give them their food, water, and shelter.  What’s more, our dogs have been selectively bred for centuries to be willing and eager companions to humans.  And it turns out that a little clear communication and some early education keeps the “bad things” from happening with my dogs just as well as all that discipline did.

Should it be any surprise that people resist the relatively “hands off” techniques of modern reinforcement based training?  Isn’t that just “coddling” the dog?  Aren’t we just “bribing” them to do what we want?  Don’t they “get away with” doing what they want because we’re not cracking down on them?  It’s not easy to counter these kinds of arguments.  There are no quick and easy sound bites that can sum up the advantages of positive training in a few words.  So it’s easy to see why people look cautiously at positive trainers and behavioural science.  If they are not showing the dog who’s boss, what exactly are they doing?

A lot of dog owners come from a long history with dogs.  My wife cannot remember a time when she didn’t have dogs in her life.  For many of us, they are just a part of our lives that we would not want to be without.  With all of that experience, it’s not surprising that many people feel they know what they need to know about dogs just from having lived with them for so long.  But is the “wisdom of experience” really the experience of wisdom?  Until I was confronted with my lack of understanding about dogs, I thought I was pretty dog wise too.

Just because you have raised 12 dogs and they all walked on loose leash and never bit anyone and loved everyone who ever came into your home doesn’t mean you are a great dog trainer.  What it means that you did enough with your dogs to get the kind of life you wanted with them.  Maybe it took a great deal of effort and practice, maybe not.  Just because you found a way to get what you wanted from your dogs doesn’t mean you found the best way to get it.

There’s a certain comfort in knowing what you like and liking what you know.  Not having to re-examine whether there is a better way to go about training your dog saves a great deal of time and effort.  For me, there wasn’t a choice.  For most people there just isn’t enough reason to challenge what they’ve been doing and thinking about dogs for years.  I suppose Sir Issac Newton might call this a kind of “intellectual inertia” if he were inclined to comment.  Change, for most of us, does not come easy and it’s most often avoided. 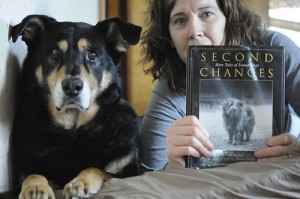 Crossing over to positive training from more a more traditional view of dogs is not easy.  I applaud those who have made the change.  I have great respect for those who, unlike me, didn’t require a crisis to get them to reconsider how they lived and worked with their dogs.  The status quo can be a difficult thing to get past and it’s no small task to strike out on a new path in any of life’s endeavors.

Whether it’s the condescending smile of a know-it-all neighbour who watches too much of that TV dog trainer or or the politely tolerant smile of your local dog obedience instructor, there are lots of subtle social pressures on you to train your dog the way you’ve always done it or at least the way it’s expected.  Our culture of discipline says that if you’re not showing your dog who’s boss then you’re just not being a responsible citizen.

And what you’ve been doing with your dogs has been just fine, hasn’t it?  Maybe it’s not perfect but it’s “good enough” for you.  If that’s how you truly feel, then there really is no reason to change.  But what if there were a better way?  A way to work smarter and get the “good enough” results you have with half the effort?  Would you make the effort?  Would you make that effort even if those around you who preferred a more traditional path disapproved or told you it was unnecessary to check out positive training?

I guess what I’m saying is that it’s easy to accept a lot of the “conventional wisdom” about dog training.  It’s much easier to go with what we know rather than learn something new.  Change is difficult.   Change can be scary.  But what if “good enough” could be better?  What if that “culture of discipline” isn’t the only way to great dogs?  What if, like me, you discovered after decades of life with dogs that there can be a better, smarter, more satisfying way to work, live, and train with dogs?  Would you find a way to cross over to positive training?  I hope so.

Until next time, have fun with your dogs.

Eric has been been training and living with dogs for over 20 years. In 2002, Eric made a bold change in his training philosophy by turning away from Traditional, ... Read Full Profile