You are here: Home / Arts-Culture / The Film-School Student Who Never Graduates: A Profile of Ang Lee, Part Two 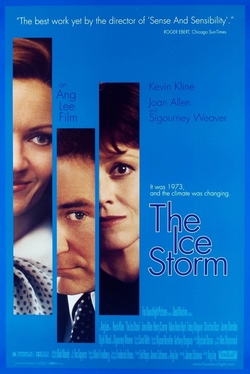 While the subject in this film remains family, The Ice Storm is a radical departure from Lee’s first four commercial efforts. The Trilogy and Sense and Sensibility can be characterized as romantic and gently comedic, and each film ends neatly in a positive resolution of the plot whereas The Ice Storm is much darker and edgier in tone. The characters are more complex and the families more dysfunctional; the outcome, tinged with tragedy, is ambiguous. In The Ice Storm Lee probes more deeply into the psyche of each character, brilliantly integrating the details of the historical, cultural, and environmental moment into the mood that both drives and is driven by the evolution of those psyches.

The action of the film takes place over the 1973 Thanksgiving weekend in New Canaan, Connecticut and culminates in the ice storm that actually took place in Norther New England in December of that year. The plot revolves around the unhealthy interactions of two families – the Hoods and the Carvers, who are suburban neighbours and friends. Ben Hood (Kevin Kline) is having an affair with Janey Carver, a bored upper-middle-class housewife, and is experiencing disillusionment in his career. Ben’s wife Elena is undergoing her own mid-life crisis and is caught in the act of shoplifting. The children, by turns dreamy, rebellious, libidinous, and reckless – reflect the angst of the parents.

On the Friday after Thanksgiving Elena discovers the affair between her husband and Janey and a fight ensues. However, the pair feel obliged to attend a neighbourhood party despite the worsening weather and their mutual hostility. The event turns out to be a “key party,” where guests place their car keys in a bowl on arrival and at the end of the evening, each female partygoer picks a set of keys from the bowl and goes home with the male owner of the car to which the keys belong. Janey hooks up with a young man, Ben makes an attempt at protest, and Janey’s husband Jim thereby also discovers the affair. Jim and Elena make a clumsy attempt at sex in his car, he offers to drive her home, and discovering the road blocked, ends up taking her to the Carvers’ house, where Elena discovers her teenaged daughter Wendy in bed, naked, with the prepubescent younger Carver boy. Meanwhile, Mikey Carver has gone out into the ice storm. He slides down an icy hill and at the bottom rests on a guardrail at the side of the road. A tree, heavy with ice, falls on a live wire, which lands on the guardrail, electrocuting the boy. His body is found by Ben, who takes the boy back to the Carver house and delivers it to Jim, who is devastated.

At the end of the film, Ben, Elena, and Wendy Hood are at the train station, where they have just picked up Wendy’s older brother Paul, who had taken the last train in from New York, where he had been hoping, futilely, to seduce one his classmates. As the four members of the Hood family are sitting in the car, Ben begins sobbing uncontrollably.

The Ice Storm, like Brokeback Mountain, is a quintessentially American film. The social and cultural context in which the plot of the movie unfolds is the product of the sexual revolution and of the momentous political events that took place in the United States the 1960s. For those of us who were alive and aware in 1973, The Ice Storm actually feels like 1973. Ang Lee arrived in the United States as a student from Taiwan – where he had grown up in a cultural, social, and political milieu entirely different from that depicted in the film – in 1978. Yet the director was curious and courageous – and haunted – enough to immerse himself in the cultural artefacts of this period and create a film that faithfully and beautifully captures the angst and the emptiness of the post-60s era. 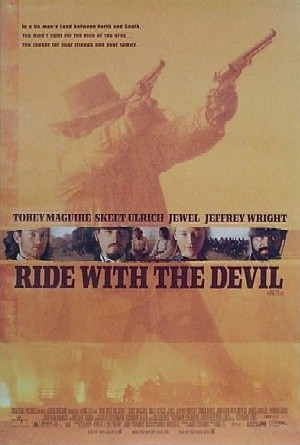 Ride With The Devil Poster

Ride with the Devil

In Ride with the Devil, the “thoroughly Chinese filmmaker” again takes the cinematic road less traveled: he makes a movie about the American Civil War in which the “bad guys,” military supporters of the Southern cause, are the protagonists. This oddly unsatisfying film follows the fortunes of a group of young Confederate sympathisers, called Bushwhackers, as they kill Yankees in Missouri, the only southern state to support the Union in the Civil War.

The first act of the plot unfolds in a conventional manner. The father of Jake Roedel’s (Tobey Maguire) best friend Jack Bull Chiles (Skeet Ulrich) is murdered by pro-Union Jayhawkers on the day his daughter is married. Jake and Jack join a small band of Bushwhackers and patrol the countryside on horseback, often disguised as Union soldiers, killing as many Jayhawkers and their sympathisers as they can. The gang, which includes a freed slave named Holt (Jeffrey Wright), manages to stay one step ahead of the better organized, better equipped Union army. Near the end of this act, Jake learns that his father, a Union supporter, has been brutally murdered by a Union prisoner that Jake set free.

When the gang splits up to hunker down for the winter, the plot loses its momentum and moves the characters into a cycle of action and rest that quickly becomes uninteresting. Members of the Bushwhackers are killed off, leaving only Roedel and Holt. By the end of the film, Roedel has lost his southern racist “values” and abandoned his killing ways; he has become a husband and a father. Through the death of his saviour, Holt has achieved true freedom; he sets off to find his mother in Texas.

Here is the final paragraph of Roger Ebert’s review of Ride with the Devil:

Watching the film, I could see that Ang Lee and his frequent collaborator, screenwriter James Schamus, were in search of something serious. “Ride With the Devil” does not have conventional rewards or payoffs, does not simplify a complex situation, doesn’t punch up the action or the romance simply to entertain. But it is, sad to say, not a very entertaining movie; it’s a long slog unless you’re fascinated by the undercurrents. It’s a film that would inspire useful discussion in a history class, but for ordinary moviegoers, it’s slow and forbidding.

Director Lee is fascinated by the undercurrents, more than he is by conventional storytelling. He is attracted to this story because it is told from the point of view of the losing side, and as a Taiwanese, Lee carries an intrinsic empathy for the loser (the Kuomintang, or Nationalists, retreated to Taiwan after losing the civil war to the communists in the last half of the 1940s; later, they lost again, when the world withdrew diplomatic recognition in favour of recognizing the communist regime on the Mainland in the 1970s). “Was I scared when I did it? Of course, I was scared. Who am I to portray the Bushwhackers?”

The film was a financial disaster. From a $35 million production budget, it earned a paltry $635,000 at the box office. In contrast, Lee’s first English-language film, Sense and Sensibility earned $135 million worldwide on a budget of $16 million, and the movie that followed Ride with the Devil, Crouching Tiger, Hidden Dragon made $230 million from a production cost of $15 million. 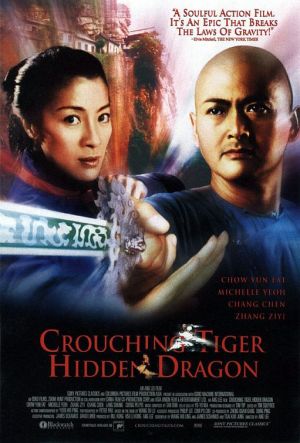 Apparently undaunted by the box-office failure of his most recent project, Ang Lee believed that after making six films he had acquired enough experience to take the next giant leap and fulfil his boyhood dream of making a martial arts film. Of course, for Lee, Crouching Tiger, Hidden Dragon would not be just any martial arts movie; it had to be made according to “my way of interpreting what a martial arts film should be.” That meant accomplishing the near impossible: balancing the spellbinding choreography of fighting sequences, the heart of the genre, with the sensibilities of an art-house film. Along with dazzling swordplay, Crouching Tiger, Hidden Dragon would have romance, feminist social commentary, gorgeous cinematography, a compelling score, and fine acting. Would such a film appeal to audiences and achieve success in both the traditional market for martial arts movies and in the West? This was the risk the director was willing to take in order to realize his dream.

Crouching Tiger, Hidden Dragon is the story of two women, a man, and a famous sword in the Qing Dynasty (1644-1912). Li Mu Bai (Chow), a revered swordsman, has decided to retire and wants to gift his four-hundred-year-old weapon, Green Destiny, to a patron in Beijing, Sir Te. He asks Yu Shu Lien (Yeoh), the unmarried head of a thriving family business and also a skilled martial artist, to take the sword to Beijing and give it to Sir Te. Li Mu Bai and Shu Lien have long harboured passionate feelings for one another but have been unable, due to circumstances and tradition, to express their love.

Sir Te invites Shu Lien to stay at his luxurious home as his guest. Staying with the nobleman at the same time are the governor of Beijing and his daughter Yu Ren (Zhang Ziyi), a beautiful young woman of haughty aristocratic demeanour who also happens to possess a seemingly childish curiosity regarding the life of the itinerant martial artist. She meets Shu Lien as the older woman is carrying the precious sword to the place in which it is to be kept in Sir Te’s home. In the middle of the night Yu Ren steals the sword, revealing the secret that she is also a brilliant martial artist. The adventure begins.

Along the way an undercover policeman is murdered by Jade Fox, the female killer of Li Mu Bai’s master; Yu Ren is abducted by a gang of desert marauders and becomes the lover of the gang’s leader, Luo Xiaohu, known as Dark Cloud; Li Mu Bai recovers Green Destiny and pledges to use it to exact vengeance for the death of his master; there is a quirky swordfight between Yu Ren and Li Mubai in the treetops of a bamboo forest; and finally, Li Mu Bai vanquishes his nemesis but loses his own life in the process. And there is no tidy resolution at the end of the movie.

The complexity of the financing for Crouching Tiger, Hidden Dragon was labyrinthine. The fighting sequences took months of preparation and practice and often dozens of takes to perfect. The location shooting was often logistically challenging and physically wearing. The actors and the crew were a Babel of languages; Chow Yun-fat (first language Cantonese) and Michelle Yeoh (first languages English and Malay) both had to study Mandarin for their parts before they could speak a line on film. Yet Ang Lee was unwavering in his determination to make the film in his own way. The gamble paid off, both in critical acclaim and in box office returns. Crouching Tiger, Hidden Dragon garnered ten Academy Award nominations, including for best picture and best director, and ended up with four Oscars (best foreign-language film, best cinematography, music, and art direction/set decoration).

“Film Poster for The Ice Storm.” Wikipedia, Fair Use

At the age of 55 Ross said goodbye to the business of education-for-profit and began pursuing a delightfully monkish life of reflection and study. He soon discovered that he loved to write, and along with occasional attempts ... Read Full Profile