You are here: Home / Arts-Culture / Jammin The Blues 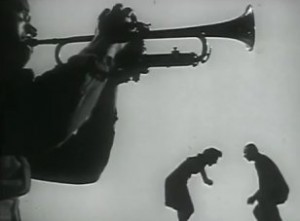 Smoke curling from the cigarettes, to the ceilings of dark rooms, the simplicity and purity of the music endures, it speaks for itself, to anyone who will listen. What it says and the why of it are for each listener to discern, because as much as each player brings his life to the instrument and the music, so too each listener. A communion of sorts, a moment in the dark becomes a path to a light of recognition; of pain and loss and above all else, of enduring, surviving, carrying on, of love.

The movie was directed by still photographer Gjon Mili, He was the first to use electronic flash and stroboscopic light to create photographs that had more than scientific interest. “Time could truly be made to stand still. Texture could be retained despite sudden violent movement.” he once said.

The film, shot by his friend Robert Burk, employs these techniques to enhance the music. Norman Granz was the technical producer for the session as he was for so much of what has become the music we know as jazz.

I write and take pictures because it is my way of telling stories. I run because it reminds me, everyday, that I am here. I have no idea where the writing comes from. What I do know is that I start with what I know ... Read Full Profile